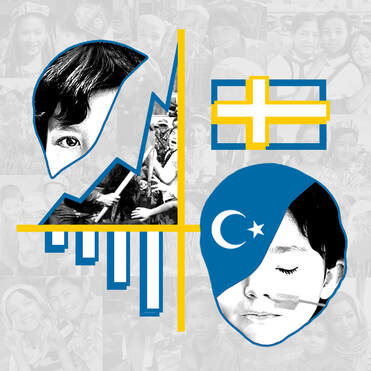 "Resignation syndrome, known as Uppgivenhetssyndrom, is an illness in which adolescents fall into a coma-like state when facing the trauma of deportation. all victims of the disorder have been youngsters seeking asylum after migration and have two common factors: they are psychologically traumatized, and they have lost all hope.⁣⁣⁣⁣⁣⁣⁣
⁣⁣⁣⁣⁣⁣⁣
For decades the condition was found only in Sweden, but it's recently been afflicting migrant children awaiting Australian asylum on the Pacific island of Nauru, sent there for “offshore processing,” although resettlement rarely takes place. They’ve fled harrowing situations in countries including Iran, Somalia, and Myanmar. In Sweden, nearly all afflicted children emigrated from former Soviet and Yugoslav states and are disproportionately Roma or Uyghur. ⁣⁣⁣⁣⁣⁣⁣
⁣⁣⁣⁣⁣⁣⁣
Sweden has been a haven for refugees since the '70s, accepting more asylum seekers per capita than any other European nation, but the country’s definition of political refugees has narrowed as concerns about overburdened welfare systems and scant public resources deepen. The only cure for the syndrome has been a positive resolution of the children’s and their families’ asylum claims and the resulting sense of security. the children then gradually wake from their comatose state.”
--⁣
The syndrome is a physical manifestation of the trauma of being a refugee with no permanent home. Stabilization is never quick or easy, but we need new policies and programs in order to maintain humane conditions during the aslyum process and to avoid situations like the extreme overcrowding at the El Paso Del Norte processing center.⁣⁣⁣⁣⁣⁣⁣
⁣⁣⁣⁣⁣⁣⁣
I applaud Sweden for its progressive practices, including its recent decision to grant refugee status to all Uyghur Muslim asylum-seekers from the Xinjiang province in China, where the government has detained an estimated million Uyghurs in "re-education" (concentration) camps in a crackdown on Islam - yet another 21st century ethnic cleansing.

--
Inspired by The New Yorker's article "The Trauma of Facing Deportation"